The demolition of this famous Wiltshire landmark made headlines in 2018. Behind the scenes a Pipefix crew were on hand to help…

We are an approved contractor for Tarmac, and have completed a number of projects for them including leak detection and repairs at some of their quarry sites and the replacement of water mains on their production sites.

The Cement Factory in Westbury  was famous for it’s tall chimney, built in the 1960’s out of reinforced concrete and standing 122metres high.

Production of cement stopped on the site in 2009, but the site is still active for other works, so when the plan to demolish the chimney with a controlled explosion was approved the company started to engage with a number of contractors to ensure that the damage to the site was as un-disruptive as possible.

Pipefix had already been on site that year to map the water mains around the site and carry out various repairs and upgrades. We confirmed that the planned fall zone was across one of the principal water mains for the site and put together a contingency plan to restore the water supply to key areas of the site if the falling chimney burst the pipes.

Pipefix had a team on site on the day of the demolition to isolate the water supply during the explosion, and carrying 750metres of water pipe and sufficient fittings to cut and join the pipe and run a temporary overland supply if required.

As it happened, the falling chimney did burst the pipe in several places, but our team were able to install the bypass and get the site back in water in just a couple of hours.

Can you spot our van in the picture below right? Thanks to Simon at Skynamite for letting us use the image that he took with his drone camera. 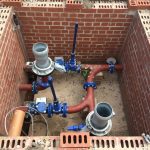 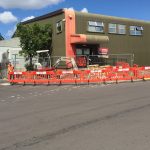