Death of the Soakaway

Back in 2015 new rules came into force concerning the discharge of treated sewage to the ground, but a surprising number of our clients still ask us to install a soakaway to dispose of the discharge. Soakaways are cheap to install and can run without trouble for many years, but unfortunately they do not have sufficient surface area to promote the final bacterial colonies which feed off the final discharge and neutralise it. For this reason a new set of guidelines was produced.

Rules for existing and new discharges

You must use a septic tank or small sewage treatment plant to treat the sewage and then discharge the effluent (treated liquid) to ground via a drainage field.

A septic tank is an underground tank where the solids sink to the bottom, forming a sludge, and the liquid flows out to a drainage field.

A drainage field, also known as an infiltration system, is a series of pipes with holes placed in trenches and arranged so that the effluent can trickle through the ground for further treatment.

You cannot use a soakaway (designed for draining rainwater), well or borehole for discharging effluent to ground. Instead you must either upgrade to a drainage field or apply for a permit so that the Environment Agency can assess the risk of using this sort of system in your location. 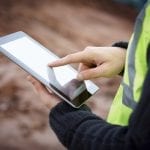 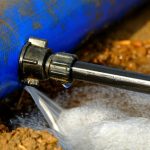